With the decolonization process gathering momentum, there was a sudden spurt of communal violence in Eastern Bengal. The Noakhali and the Tippera riots set off an exodus of non-Muslims into northeast India. This exodus grew with time; there was a migration of people to and from India and Pakistan, which led to pressures on the governments of both the dominions to facilitate relief and rehabilitation for the displaced. The government of Pakistan was sympathetic to the Muslim migrants unlike the government of India which did not have any consistent relief and rehabilitation policy. By September 1947, this government was confronted with the presence of lakhs of non-Muslim migrants from Pakistan, who “crossed over from the western region of Punjab” into various parts of North India. It was not long before the government of India realized that a new ministry had to be created to tackle the crisis like situation. Shri K.C. Neogy was inducted into the Nehru cabinet as Minister of Relief and Rehabilitation on September 6, 1947. The ministry was successful in dealing with the Punjab situation and by 1948, most of the displaced had been rehabilitated in various towns of north India.

The situation in the east was different. The provincial governments of Assam and Bengal were hit hard by the exodus, which swelled to a tide by 1950. Both the provincial governments were reticent to rehabilitate the displaced. The situation in Assam was more critical as the communal question was more complicated by Assamese-Bengali antagonism. But the central government of India was insistent that the provincial governments facilitate some relief and rehabilitation policy for the displaced, a position that complicated matters for both parties. The situation on the ground was far from satisfactory, as the violence against the religious minorities in East Pakistan only increased over time. Despite the Nehru-Liaquat pact signed by the prime ministers of the two dominions, there was little improvement on the ground. In this circumstance, the Displaced Persons’ Association was formed at Shillong in 1950, the capital of the composite state of Assam, which devoted itself to the task of rehabilitation of the refugee Bengali families who had migrated to the territory now comprising the state of Meghalaya. This rehabilitation movement was led by Dhruba Nath Joshi and Bimal Sengupta; S.M.Das became the president of the Association. By 1963, only 400 families were granted settlement in the urban areas with homesteads. The Rynjah Colony was one such colony for people displaced by Partition and was sanctioned in 1953 with the plots being handed over to the families in 1958-59. The interview that follows gives an overview of the establishment of the colony. 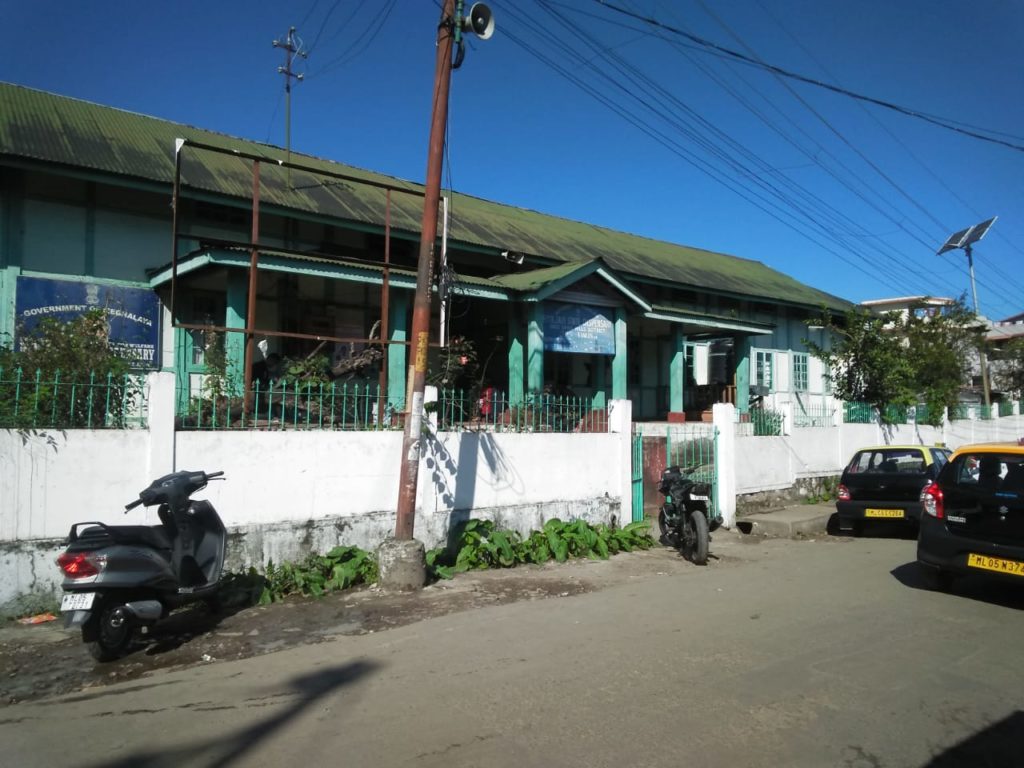 Binayak Dutta: Thank you for sparing your time to share your thoughts. I was thinking of interacting with you as you are one of the oldest residents of the locality today. Can you share with us the background for the establishment of this Refugee Rehabilitation Colony?

Subodh Chandra Choudhuri: I am happy that you have come to listen to us as a lot of information that we carry with us will otherwise be lost with our passing. That apart, this information is historically very important and should be retained for posterity.

The land for permanent refugee rehabilitation was acquired by the Government of India through the agency of the state government at Rynjah and Bhagyakul to settle the displaced who were forced to migrate from their home and hearth to India because of Partition. The Government of India decided that the displaced from East and West Pakistan be given permanent settlements and the Assam government was asked to identify plots of land for the settlement of these displaced people. Accordingly, the land was identified and acquired.

BD: Is it possible for you to share with us some details of the Refugee Colony of Rynjah?

S.C.C.: As per the plan of the Government of India, Bhagyakul in Laitumkhrah was settled with 30 displaced families. After that the Displaced Persons’ Association, Shillong, took up the matter with the Government of Assam for settlement of more displaced families in Shillong. Accordingly a piece of land measuring 23.56 acres, more or less, was identified, and 28.16 acres of land were acquired within the village of Rynjah vide notifications dated 14th August, 1953. The Deputy Commissioner was entrusted to complete the inspection of the plan of the lands earmarked for the settlement of the displaced and their permanent rehabilitation. Although the acquisition of the lands happened earlier, the allotment of plots of land to the families were made during the Chief Ministership of Shri Bimola Prasad Chaliha.

BD: Can you remember the names of some prominent people and organizations associated with refugee rehabilitation at Shillong?

S.C.C: The Displaced Persons’ Association Shillong, headed by Dr. Sudhangshu Mohon Das took up the matter with the Government of Assam and India. Another association working for the refugees was the Refugees Aid Society led by Shri Akhil Bhattacharjee, the resident representative of the Amrita Bazar Patrika. This society provided much support to the displaced. They provided an identity card for the displaced persons which were later recognized by the Government for the allotment of land for the displaced. Shri B.P. Chaliha who was selected by the Congress as the Chief Minister of Assam had to seek election to the Assembly from some constituency. He chose Badarpur, an constituency which was home to a number of displaced people. The Displaced Persons Association, Shillong, sent two of its prominent members, Joint Secretary, Shri Sailendra Kr. Chowdhury and Shri Basanta Kr. Sen to campaign for Shri Chaliha at Badarpur which helped the Association to secure a favour for the refugees from the Chief Minister. After winning the election, he came to the Rynjah locality and was of the opinion that it was suitable for permanent settlement for the displaced as a perennial water source was close by on the banks of the River Umshyrpi. This opinion was in contrast to another report made before his visit which was against this plot.

Chaliha was convinced that this plot was proper and he ordered the settlement of refugees on it. This settlement started in 1958. 275 families of displaced persons and refugees from Sylhet and East and West Pakistan were given settlement and letters of allotments were issued.

BD: Please tell us something about the settlement process.

S.C.C: The Allotment of the plots were made in a phased manner in 1958/59. Accordingly 275 plots were distributed to the displaced persons for settlement. For example, the allotment of my plot of land was made on 18th September, 1958, and possession of the plot was granted on April 22, 1959. Along with the allotment, a house building loan of Rs. 3250.00 was also provided to the allottees provided that the allottees would contribute Rs. 750. If the allottees failed to pay this sum, as their contribution, a sum of Rs.1000 would be deducted from the loan. Three bundles of C.I. Sheets were also given to each of the displaced families to assist the construction of their residences. Loans were given in two instalments; 50% of the loan would be provided given that 10% of the amount would be paid by the allottee. They would reside in the plot themselves and there was no provision for any subletting. The development cost of the land including the cost of water supply, roads, etc., was to be debited to the cost of the land which will be treated as a loan to the allottee. Individual water supply to the houses would be at the cost of the allottee. Interest of 4.5 % would be charged on the loan from the date of sanction with 3 years moratorium on repayment of the loan. The allottee had to start construction within 2 months of the allotment failing which the allotment of the plots would be cancelled. There is no doubt that the conditions were very stringent. 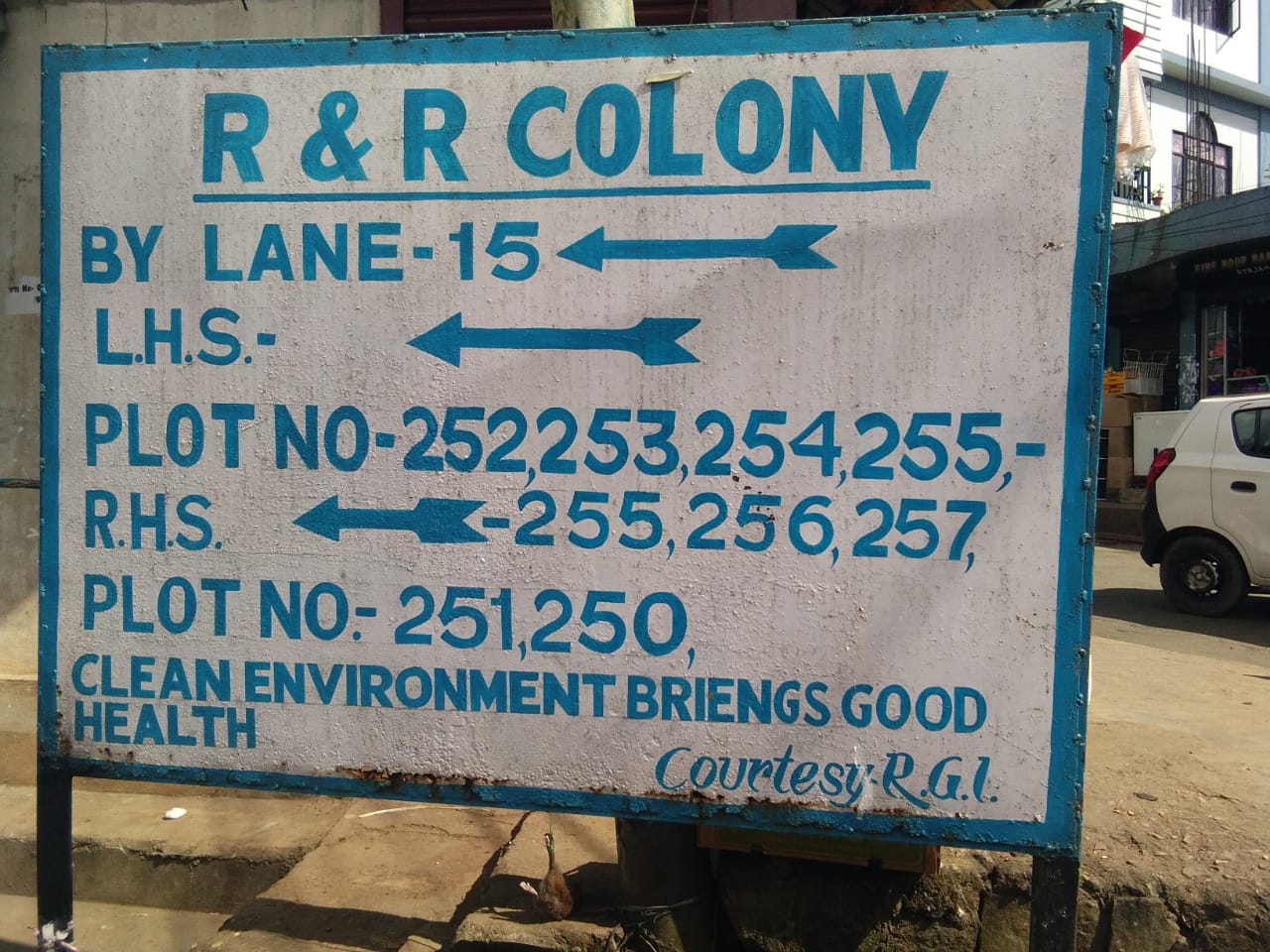 BD: Tell us about the initial phase of the establishment of the colony.

S.C.C: When the first stream of refugees came to the plots at Rynjah in the early part of 1961, they found about 40 street hydrants for supplying drinking water to the displaced and refugee families. The roads from Nongthymmai to Umpling and the roads within the colony were all kuccha roads. These roads were topped with tar only when Shri. P.G. Marbaniang became our MLA, that is, the MLA for Laitumkhrah and Rynjah. He took the initiative for black topping of the roads with the PWD. He also helped the refugees and displaced in developing the source of water supply. This was the condition when 3/4th of the allottees had already started to construct their houses. There was no electric supply in the whole area and people had to use kerosene lamps. There was also no bus service. There was no government dispensary but there was an extra-departmental post-office run by Shri Kumud Bihari Deb Krowri (who was a mukhtear) practicing in Shillong. He also started a laundry in his house by engaging some people. He also managed to have a telephone connection (first telephone connection in the locality) of which we could avail the services by paying a token amount. His telephone was our only channel of communication in our vicinity at that time.

B.D.: When and how did you first come to the locality?

S.C.C: Before coming to Rynjah, I was staying at Laban with my family. I met Shri Dharani Kanta Choudhury, then working as the Special Officer, Relief and Rehabilitation Department, who was also allotted a plot of land in our area. He requested me to come over to Rynjah as he had arranged a meeting of the allottees at the locality. The meeting was held at the temporary shed of Shri Mahendra Ash Choudhury, east of the plot of Shri Uma Pada Mishra. Shri Choudhury was a contractor by profession. This was in 1960, but I cannot remember the exact date. Actually we came to Rynjah in a hired taxi to attend the meeting. About 25 persons attended the meeting. The Welfare Society of the locality was the outcome of the meeting. I finally moved to the locality in 1961.

B.D.: Tell us about the formation of the Welfare Society.

Binayak Dutta is Co-founder and Editorial Chair at Partition Studies Quarterly. He teaches Modern India in the Department of History, North Eastern Hill University, Shillong. His areas of special interest include Partition of India studies, Migration, Displacement and Gender Studies. He has authored three books besides research papers in edited volumes and journals. He is editing an upcoming volume on Partition in northeast India.