1947- A Soldier’s Story From the Records of Maj. Gen. Mohinder Singh Chopra 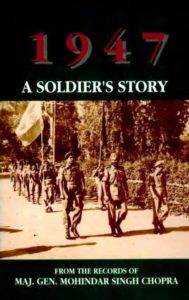 P.14: 1947 had dawned for Lt. Colonel Mohindar Singh Chopra and his family at Ambala, the large cantonment station in the Punjab some 120 miles north of Delhi, astride the Grand Trunk Road where, since the end of World War II, he had been Commandant of the Army School of Physical Training (ASPT) whose headquarters alternated between Ambala for six months of the year and Kasauli, in the Simla Hills, during the hot weather months. […]

P.15: After handing over reins of the ASPT in February 1947, Mohindar Singh Chopra spent some months at Army Headquarters before the catalytic political events of mid-1947 were to place great and unimagined responsibilities upon him, even before he was 40 years of age […] Lt. Colonel Mohindar Singh Chopra and his family travelled to the east of India in June 1947, and this is best described by Deep, his elder daughter who recollected those momentous months of 1947: “ The first thing that comes to mind about father’s transfer to Shillong in June 1947 is the long arduous journey taking us from the Simla Hills through virtually the breadth of North India along the great Gangetic plain, barren and dry before the monsoons but slowly turning lush as we reached the Assam Hills with their evergreen forests, full of flora seldom seen in the north. […]

P.16: In July, father had temporarily moved with his regiment, to Sylhet for its Referendum and we got our first inkling of the great changes taking place in the country […]

P.23: When, on 2 June 1947, the Viceroy Lord Louis Mountbatten held his momentous meeting with Indian political leaders, the principal features of the British Government plans to transfer power in British India to representatives of the Indian people included, as a principal feature, the partitioning of historic provinces, primarily Punjab, Bengal and Assam. Concerning the latter, the statement made by Mr. Atlee in the House of Commons on 3 June,1947 stated, “Though Assam is predominantly a non-Muslim province, the district of Sylhet which is contiguous to Bengal is predominantly Muslim. There has been a demand that, in the event of the partition of Bengal, Sylhet should be amalgamated with the Muslim part of Bengal… accordingly, a Referendum will be held in Sylhet District under the aegis of the Governor General and in consultation of the Assam Provincial Government to decide whether the district of Sylhet should continue to form part of Assam Province or should be amalgamated with the new province of Eastern Bengal.

The next day on 4 June, the Viceroy Lord Mountbatten discussed the plan with Jinnah and other Muslim leaders “who were as much distressed as were the Congress leaders at the prospect of partition… (but) the idea was that if Assam were to be partitioned, then Sylhet and possibly contiguous areas where there was a definite Muslim majority should be separated.”

P.25: The Referendum as to whether Sylhet District was to join East Bengal or remain in Assam was eventually fixed for the 6th and 7th July, with voting taking place simultaneously at 239 polling booths throughout the District. Sir Akbar Hydari, the Governor of Assam had asked the troops be made available to assist in maintaining order with military impartiality and preventing intimidation. An urgent conference was held at Government House in Shillong on 20th June, with the Chief Secretary Sir Harold Dennehy ICS, Brigadier G.A. Bain, the Commandant, Shillong Sub-area, Lieut. Colonel Mohindar Singh Chopra, Commandant SYLFORCE, Mr. H. G. Bartley Inspector General of Police, Mr. Herbert Cecil Stork, Referendum Commissioner, Mr. J. Dumbreck, the Deputy Commissioner Sylhet and Mr.D. Dutt, Superintendent of Police at Sylhet in attendance. 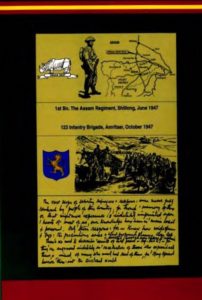 Earlier that day, as envisaged in HQ Shillong Sub-Area Operational Instruction No.2, Lt. Colonel Mohindar Singh Chopra had been appointed in command of the force being assembled to be known as SYLFORCE as Commandant and whose composition was to be:

P.27: While the task of the SYLFORCE was to “dominate Sylhet District” and be responsible for the maintenance of order and the prevention of intimidation by either community, the civil police, including Assam Rifles, Railforce and Armed Police as already in the district, or reinforced, would be responsible for the maintenance of order at the polling booths themselves and their immediate vicinity. The strength of the Railforce and Assam Rifles was computed as 1890 personnel.

SYLFORCE troops were also to act as Mobile Reserve and be prepared to back up the Police in carrying out their tasks. The troops would have to be dispersed down to platoons but should be kept as concentrated as possible, both for ease of command and administration, but primarily to have adequate striking power.

Both H. C. Stork and J. Dumbreck expressed their apprehension that trouble was possible not only during the actual taking of the Referrendum but up to, and immediately following the announcement of its result. However, they stated somewhat laconically that if the verdict was in favour of “secession”, trouble was not likely […]

P.28: “Pressure is already being brought to bear on Hindu Voters in villages that they should cast their votes for Pakistan if they want to live in peace. If they do not agree to this, then life, home, hearth and property will be in danger…threats are being given and ill-treatment already going on.” […]

Major J. Akenhead, the GSO II at Shillong Sub-Area headquarters who had attended the Deputy Commissioner’s meeting with the Muslim League leader Abdul Hamid and Congress ‘Dictator’ Choudari, reported that the “ former sat back and smiled smugly while the latter was very nervous.” “This seems typical of the outlook of the two parties – Congress supporters definitely have the wind up.” He also reported that the Muslim organization and propaganda was obviously much better than that of the Congress while there were many Muslim League processions and flags, there were hardly any signs of the Congress. In fact the D.C. J. Dumbreck was convinced that there could be only one result of the Referendum that Sylhet will go to East Bengal. In this event, the D.C. anticipated no serious communal riots although some minor clashes were inevitable. The Muslim majority was so great that Hindus would hardly dare to take them on and where they were equal number, or even a Hindu majority, “they (the Hindus) have not the guts.” […]

The D.C. assessed that the Leaguers were even more bitter against Jamiat than against the Hindus. “The Jamiat have been sitting on the fence (but) now that propaganda has taken a religious form, they may vote to go to Pakistan,” […]

There was no doubt that the Sylhet District was in the grip of Referendum fever and the parties were carrying out the electioneering tactics. Non-Muslim population showed apprehensions when Muslim National Guards flooded Sylhet from outside. The National Guards penetrated into the remotest villages and created panic in the minds of the non-Muslim villagers. Motor vans with microphones and loud speakers served as propaganda medium.